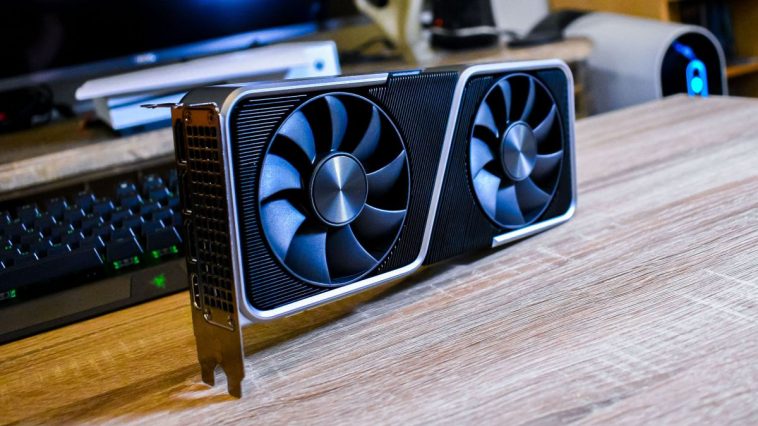 The Nvidia GeForce RTX 3070 reminds us in a lot of ways of the GeForce GTX 970 from 2014. When that graphics card came out, it became possible for folks to max games out at 1080p, hitting high framerates while on a reasonable budget.

Even games like the Witcher 3 and Batman: Arkham Knight, which are still monsters to this day, ran like a dream on the GTX 970. And, because of that, the GTX 970 has the kind of legacy that few graphics cards ever manage to attain – and the Nvidia GeForce RTX 3070 follows squarely in its footsteps.

The comparison isn’t perfect, though. The RTX 3070 is much more expensive for one, launching for $499 (£469, AU$809), whereas the Nvidia GeForce GTX 970 launched for just $329 (about £250, AU$460), back when graphics cards were reasonably priced. Prices are still the same as with Turing, so maybe we should count our blessings that Nvidia hasn’t deigned to raise the price again.

Unlike the GeForce RTX 3080 or the RTX 3090, this graphics card isn’t providing a level of performance never seen before, but with its approachable price and high performance, it’s the de facto graphics card for most people.

The Nvidia GeForce RTX 3070 is available starting October 28, at $499 (£469, AU$809). That price is simply where the RTX 3070, including the Founders Edition reviewed here, will start, with certain aftermarket cards jumping up in price from there.

The Nvidia GeForce RTX 3070 is powered by the Ampere GA104 GPU. This GPU has 5,888 CUDA cores spread across 46 Streaming Multiprocessors, based on the same Nvidia Ampere architecture as the RTX 3080 and RTX 3090. And, as with those cards, there are a ton of improvements both to raw performance and to power efficiency here that drive this mid-range graphics card to performance levels matched only by the very best graphics card of the last generation.

The biggest generation-on-generation improvement from Turing to Ampere is that both data paths on the Streaming Multiprocessor (SM) now support FP32 workloads, which sees an effective doubling of CUDA cores per SM. That’s why, while the RTX 2070 had 36 SMs, it had just 2,304 CUDA cores. So, while the RTX 3070 only boosts SM count up by 27%, it more than doubles the CUDA core count, which massively boosts raw rasterization performance.

That’s impressive enough, but we’re also getting second-generation RT cores and third-generation Tensor cores, which means both ray tracing and DLSS are much more performant and efficient. Ray tracing especially is much faster, as this new RT core brings twice the throughput as the first-generation RT core found on graphics cards like the Nvidia GeForce RTX 2080. This is why in ray tracing-heavy workloads like the new 3DMark Port Royal benchmark, the RTX 3070 is able to keep up with the RTX 2080 Ti, even though the last-generation flagship has much more RT cores.

The Nvidia GeForce RTX 3070 is also the only graphics card in the Ampere lineup with a reasonable level of power consumption, with a TGP (total graphics power) rating of 220W, 100W less than the RTX 3080. This means that cooling requirements are going to be a whole lot less intensive than the more powerful Ampere cards, which should be excellent news for folks that don’t have a ton of room in their cases for larger graphics cards.

That’s a whole lot of jargon, but what’s important here is that while the RTX 3070 is a much smaller chip, it’s able to pack way more meat into it, at a lower price, making last-generation flagship performance available to the mainstream.

But beyond just straight generational improvements to the architecture, the Nvidia GeForce RTX 3070 brings a ton of features that are going to be super useful whether you’re into PC gaming or are just stuck in an endless cycles of video calls.

One of the biggest features here is Nvidia Broadcast, which is aimed at folks that are streaming games, but the utility is much more broad. For instance, in video calls, this piece of software will use the AI Tensor Cores to either blur or replace your background, and do it much more effectively than built-in options in programs like Zoom. The best part is that it works no matter what video conferencing software you’re using. Whether you’re on Google Meets or Discord, OBS or Zoom, you can use this software to get rid of the background.

This software also bundles in the RTX Voice software that debuted earlier this year, masking background noise out of your microphone, or even out of the voice inputs of the other people you’re in a meeting with.

There are also a couple of technologies that are going to directly benefit gamers, namely Nvidia Reflex and RTX IO. RTX IO is perhaps the most important, especially with the next generation PS5 and Xbox Series X around the corner, bringing with them truly next-generation data access through their SSD solutions.

Nvidia’s RTX IO will work with the upcoming Microsoft DirectStorage API to optimize the delivery of data straight from your SSD to the GPU. The way it works now is when a game needs to access data, that data goes from your storage to your CPU, then to system memory, where it’s then fed back through your CPU to your graphics card, to then finally go to your VRAM.

RTX IO, when it’s available, will cut the CPU out of that equation, cutting out one of the biggest bottlenecks in modern PC gaming. There aren’t any games that utilize this storage API yet, but when it does we should see massive cuts to both load times and to overhead in massive open world games like Assassin’s Creed Odyssey.

Nvidia Reflex, on the other hand, is available now, and simply cuts latency between your CPU and GPU by clearing out the Render Queue, so frames are only rendered when they’re needed.

This is the system we used to test the Nvidia GeForce RTX 3080 Founders Edition:

The Nvidia GeForce RTX 3070 Founders Edition is very reminiscent of the rest of the Turing cards, but it’s much smaller, thanks to the lower power and cooling requirements of the mid-range card.

It’s still a dual-slot card, but it’s much shorter, measuring just 9.5 inches (242mm) long, making it much easier to fit into smaller cases than something like the RTX 3080 which is nearly a foot long at 11.2 inches (285mm). For people with small PC cases like the NZXT H1, this is going to make way more sense than a more powerful graphics card.

Unlike its bigger siblings, however, the RTX 3070 has both its fans on the same side of the cooler, rather than the unique push-pull configuration that the RTX 3090 and RTX 3080 Founders Editions feature. The RTX 3070 does have a similar PCB, however, in that everything is super dense, which allows for the cooler to extend beyond it. That means that the second fan still pushes air through the back of the graphics card, letting it still operates in a similar manner.

This solution isn’t quite as efficient as either the RTX 3080 or RTX 3090, but it doesn’t really need to be. The TGP (total graphics power) is just 220W instead of the RTX 3080’s 320W, which means that temperatures are naturally going to be easier to manage. So, the RTX 3070 still reaches a peak temperature around 72°C, even with the lower power consumption.

However, even with the lower power consumption, you still have to use Nvidia’s new 12-pin power connector, which doesn’t make a ton of sense. An adapter is included, but it’s a single 8-pin to 12-pin, and that makes us wonder whether it was truly necessary. There are more PSU manufacturers that are creating custom cables to get rid of the extra clutter that these adapters inherently bring, but that’s something you’ll still have to fork over cash for.

But beyond the aggravating power connector, the RTX 3070 Founders Edition looks sleek as hell, and should have no problem fitting into pretty much any build. This current round of Founders Editions are some of the most attractive graphics cards we’ve ever seen, and with how good they are at keeping things cool, the FE cards are our de facto recommendation – if you can find one.

The Nvidia GeForce RTX 3070 is such an awesome piece of hardware precisely because it brings a flagship-level performance to the mid-to-high-end market. In test after test, the GeForce RTX 3070 provides extremely smooth gameplay and performance at 4K, and enables high-framerate performance at lower resolutions. If you want to take advantage of a 144Hz 1080p monitor without lowering quality settings, the RTX 3070 can do that.

Even in hard-to-run titles like Horizon Zero Dawn and Red Dead Redemption 2, the RTX 3070 provides incredible performance, scoring 75 fps in the latter title at 1080p with everything but MSAA maxed out. Anyone familiar with how demanding Rockstar’s Yee-Haw simulator is should recognize how impressive that is – given that the RTX 2070 Super gets just 57 fps in the same test.

But what’s more impressive is that in Red Dead Redemption 2 – as it is across the rest of the lineup – the RTX 3070 is within margin of error of the RTX 2080 Ti across the testing suite. Just take a look at the 3DMark TimeSpy Extreme test – the RTX 3070 scores 6,990 to the RTX 2080 Ti’s 6,986. That’s practically the same score, which is mighty impressive on a graphics card with 3GB less VRAM and also consumes less power.

And when it comes to AMD, let’s just say that Team Red better be hoping that Big Navi is extremely impressive. The closest competition that AMD currently has on the market is the AMD Radeon RX 5700 XT, which is anywhere from 38%-64% slower at 4K than the RTX 3070. Sure, the Radeon RX 5700 XT is cheaper at $399 (about £315, AU$580), but that’s a 25% price increase for up to 64% better performance – it’s pretty easy to recommend that people just save up that extra hundred bucks.

When you think about the graphics cards that have made the biggest impact over the last decade, it’s never the Titans or the the xx80s. Graphics cards like the GeForce GTX 1060 6GB, the GTX 970 or the Radeon RX 580 have all become beloved little chunks of silicon because they delivered excellent performance at a price point that didn’t scare people away.

Only time will tell if Nvidia’s inflated prices, which started with Turing, will impact whether or not the RTX 3070 becomes as beloved as any of those graphics cards, but right now it delivers the best value in the graphics card landscape. Now we just have to wait for AMD to make its Big Navi move.

You want to play games at 4K
The Nvidia GeForce RTX 3070 is easily capable of running pretty much any game at 4K without having to compromise on quality settings. Some games like Red Dead Redemption 2 might have you turn down some settings, though.

You want a good value graphics card
At $499 (£469, about AU$700), we would hesitate to call the RTX 3070 cheap, but compared to the more expensive flagship cards like the RTX 3080, it provides excellent performance for the money.

You have a smaller case
The Nvidia GeForce RTX 3070 Founders Edition doesn’t pack the same gigantic cooler that the RTX 3080 does, which will make it a much easier fit into smaller PC cases.